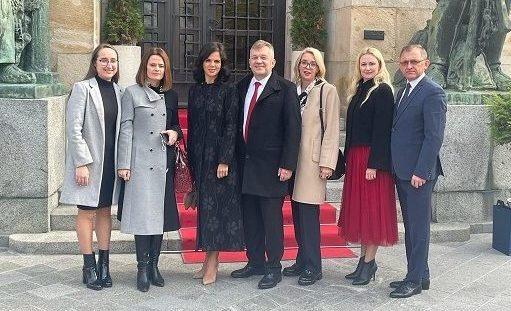 From 26-29th October 2021, representatives of the Tambov State University “G.R. Derzhavin “from the Russian Federation were guests at Faculty of Security Science.

The delegation from Russia was led by Dr. Irina Bezukladova, Director of the Department of International Relations.

The guests from Moscow were welcomed by the Dean of the Faculty of Security Sciences, Dr. Predrag Ceranic. On this occasion, the realization of a summer school in Tambov was agreed for ten students and two professors of the Faculty. The summer school will be realized in May 2022.

In the continuation of the visit, for friends from Tambov 27.10.2021. A reception was held with the President of the Republic of Srpska, Mrs. Zeljka Cvijanovic.

The educational, scientific and cultural cooperation between the Republic of Srpska and the Russian Federation was discussed at the reception.

The President of Srpska emphasized that traditionally good relations between the Republic of Srpska and the Russian Federation are a real example of partnership and a solid basis for strengthening all types of cooperation, and pointed out that connecting universities is one of its important pillars.

On Friday, October 29, 2021 year, the guests were given a reception by the rector of the University of Banja Luka Dr. Radoslav Gajanin.

The subject of the Agreement, the signing of which was initiated by the Faculty of Security Science, is cooperation in the field of education, science, culture, student exchange, organization of joint scientific research and scientific-educational events. The first activities envisaged by the Agreement were realized in June 2021, with the visit of representatives of the Faculty of Security Science and the University of Banja Luka to colleagues from the Russian Federation.

Tambov State University was founded in 1918, and teaching and scientific research are currently being conducted at twelve faculties and institutes.

Enrolment to the Second and Third Cycle os Studies

Agreement on cooperation with the Republic Pedagogical Institute signed

Dean of the Faculty of Security Sciences prof. Dr Predrag Ćeranić and the director of…