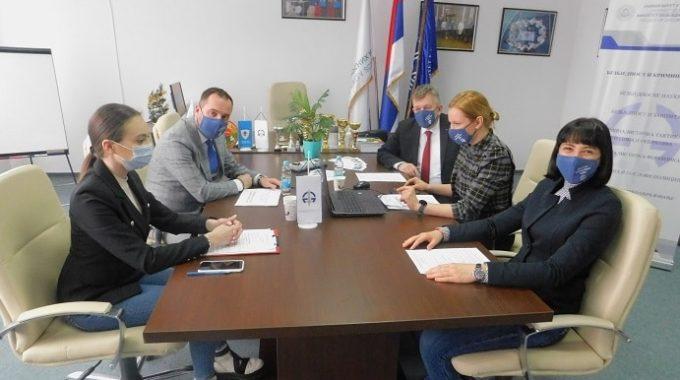 The international online conference “Contemporary Security Challenges” was held today in the organization of the Faculty of Security of the Moscow Regional State University (MGOU).

In addition to the hosts and universities from the Russian Federation, guests from seven countries participated in the conference, and the Faculty of Security Science presented itself with four presentations.

The conference was opened by the Dean of the Faculty of Security, Dr. Vladimir Leonov, emphasizing that he was especially satisfied with the participation of the higher education institution from the Republic of Srpska.

Russian language professor Natalja Milaković, on behalf of the Faculty of Security Science at the University of Banja Luka, greeted the participants and pointed out that this was the third time that the Faculty participated in conferences of this type, which is one of the activities envisaged by the Cooperation Agreement.

In addition to these activities, several study trips to Russia have been realized, and the plan is to launch a joint study program, upon completion of which students will receive a diploma from the Russian Federation and the Republic of Srpska.

In the presentation in Russian, Dean Dr Predrag Ceranic spoke about social security, the processes of integration (EU) and disintegration (Yugoslavia and the USSR), the issue of ethnic conflicts and the need for a responsible interpretation of historical events. Dr. Ćeranić especially referred to the genocide against the Serbian people committed in the so-called Nazi creation. NDH and the Jasenovac concentration camp, and the fact that of all the Nazi concentration camps, only Jasenovac was destroyed, that is. razed to the ground. All the others have been preserved, so that the crime will not be forgotten. In the third part of the lecture, Ćeranić spoke about the demonization of Serbs in popular culture (film and media). In that light, he emphasized the importance of the film “Dara iz Jasenovac”, and the treatment of this topic in culture in general.

Senior Assistant Dr. Gojko Šetka gave a lecture on “BiH Police System in Times of Global Crisis”. Dr. Šetka emphasized that the BiH police system is complex (over 20 police agencies), inefficient (conflict of jurisdiction), tendencies of political influence with the goal of its centralization are expressed, and as such it cannot respond to modern security challenges such as the migrant crisis.

Tanja Kljajić, a fourth-year student at the Faculty of Security Sciences, spoke on the topic “Consequences of organized crime on national security”. In a quality presentation, Kljajić emphasized the disastrous impact of organized crime, primarily on the economic and demographic base of society. In socialist countries, whose legacy we inherit, organized crime is seen as a phenomenon that is primarily a product of capitalist societies.

The Faculty of Security Science owes special gratitude to Professor Natalija Milaković, because she excelled in the role of moderator and translator.

Professional training for the best students

Lectures for the second generation of master students

You can see the preliminary entrance exam results HERE.