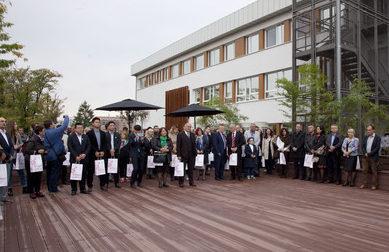 On 24 September 2019, the International Confucius Institute Day was marked by opening the Dao Garden, promoting the translated edition of ‘Mrguda’ Short Stories and the exhibition of photographs titled ‘Tianjin – the Beauty of Far East’ by the author Professor Milos Solaja, PhD.

He said that the Dao Garden, opened at the Confucius Institute, will serve its students who are studying Chinese and who wish to learn more about the culture, traditions and customs of China.

,,Again, I would like to express my gratitude to the Government of the People’s Republic of China and the Government of the Republic of Srpska for recognizing the Republic of Srpska as an area where it was possible to establish the Confucius Institute and for recognizing the University of Banja Luka as a higher education institution that, through its dedicated work, meets the standards and requirements for having this Institute established right here’’, Rector Gajanin said and added that the Confucius Institute enables much better communication between the RS and Chinese officials.

In his speech, Rector Gajanin talked highly about the work of the Confucius Institute and everything it had accomplished over the past period.

Chinese Director of the Confucius Institute Ying Cai explained that the Dao Garden is referred to as a philosophy of living a simple life in accordance with nature.

“Here we have bamboo which symbolizes people. It is always green, that is, alive, which means that we are young at heart. The bamboo stem is hollow to represent that people can still learn”, she explained pointing out that bamboo is a plant that bends with the wind, but  almost never cracks, symbolizing that people can be nice, but that they also have principles they do not give up.

She further emphasized that the Confucius Institute has done much over the past period, and that it has had the full support of the RS Government, the Embassy of the People’s Republic of China in Bosnia and Herzegovina, Tianjin University of Technology and Education, the University of Banja Luka and others.

Marking of the International Confucius Institution Day was also a great opportunity to promote the trilingual edition of Petar Kocic’s Mrguda. It is a Serbian, Chinese and Esperanto edition.

”This is Kocic’s first piece of work translated into Chinese and the first edition of the Confucius Institute and the University of Banja Luka in Chinese. It was printed in 2,000 copies”, the representative of the International Association of Scientists, Prof. Ljubisa Preradovic, PhD, said.

Members of the Dance Studio ‘Point’, the ‘Palladio String Quartet’ and a student of the Confucius Institute, Tijana Mijatovic, performed at the opening ceremony.

The event was attended by the representative of the Serbian BiH Presidency Member Nina Sajic, Assistant Minister of Higher Education Radmila Pejic, Vice Rector for Research and University Development Professor Goran Latinovic, PhD, and others.

Vasilije Vujičić and Božidar Vučurević at the Mediterranean Games “Oran 2022”

Students of the Faculty of Security Science, Vasilije Vujičić and Božidar Vučurević, are participating in…

Lectures for the second generation of master students