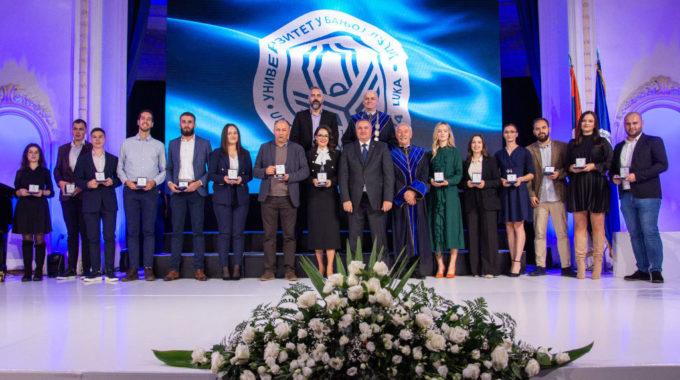 With the Solemn Academy in the Banski Dvor Cultural Centre on 7 November 2022, the University of Banja Luka celebrated 47 years of its successful work and development.

Rector Prof. Radoslav Gajanin, PhD, said that the University of Banja Luka has continuously progressed in all fields over the past 47 years.

As he said, given the fact that each institution is mostly comprised of its employees, the University of Banja Luka focused on the continued development and perfection of human resources.

,,Since the last Day of the University, its employees have undertaken activities on 22 new national and 12 international projects, which makes us particularly proud.”, Gajanin added.

As he pointed out, in the past period we achieved notable results in the Erasmus+ programme. According to him, with the support of the Government of the Republic of Srpska, the University is realizing a large number of capital investments in order to improve working and studying conditions at our higher education institution.

,,Also this year, research projects are being implemented by members of the academic community of the University of Novi Sad and the Republic of Srpska. The financing of these projects was provided by AP Vojvodina, i.e., the Secretariat for Higher Education and Scientific Research. This year’s budget has been doubled compared to 2021.“, Gajanin added.

The head of our University emphasizes that the successful cooperation of public universities in Bosnia and Herzegovina through the Rectors’ Conference of Bosnia and Herzegovina has continued, as well as the cooperation of universities from the Republic of Srpska through the Rectors’ Conference of the Republic of Srpska.

He also praised the cooperation with student organizations, and stated that this year, about 2,100 students were enrolled in the first year of the first cycle of studies, which is the level of enrolment from the last academic year.

„We no longer need staff for labour bureaus, nor those who will develop other people’s economies around the world. We need people who will stay, work and develop the Republic of Srpska. We have all the human potential and natural resources for that. The indicators set forth in our plan prepared earlier show that we are on the right path”, Prime Minister Radovan Višković said at the solemn academy dedicated to 47 years of the University’s work.

The Prime Minister pointed out that the Government is working on providing the best university students, especially the public ones, with a job in the system so that they could contribute to the even greater development of the universities and the Republic of Srpska.

He reminded that the amendments to the relevant laws enabled free schooling and education for all students of the first cycle and the first year of the second cycle of studies, who regularly fulfil their obligations.

„This year, accommodation in student dormitories is also free of charge.”, the Prime Minister said.

Minister for Scientific and Technological Development, Higher Education and Information Society of the Republic of Srpska Srđan Rajčević said today that the University of Banja Luka is one of the pillars of academic and scientific thought in the Republic of Srpska. As he says, the Ministry has achieved fruitful cooperation with this higher education institution in the past four years regarding the reform of higher education. He expressed satisfaction with the fact that the number of students at public universities remained the same as last year, which is a great success in relation to demographic and other circumstances and challenges.

,,Both public universities, especially the University of Banja Luka, have really responded to their mission and task, which is to remain the pillars of scientific and academic thought. “, Rajčević said.

Stating that the future of higher education in the Republic of Srpska is bright, Rajčević pointed out that in the future the focus should be on innovating study programmes and on occupations that bring a certain economic benefit, such as natural and technical sciences.

Minister of Education and Culture of the Republic of Srpska, Asst. Prof.  Natalija Trivić, PhD, said that the relevant ministry had successful cooperation with the University, especially in regard to joint programs related to the harmonizing of enrolment policies in secondary schools.

In his speech, Provincial Secretary Milošević announced further cooperation with the University of Banja Luka and thanked everyone who contributed to the strengthening and establishment of cooperation between the Republic of Srpska and Vojvodina.

You may see the photos in the photo gallery.

Invitation to participate in CEEPUS III Networks for Academic 2020/2021

Vasilije Vujičić and Božidar Vučurević at the Mediterranean Games “Oran 2022”

Students of the Faculty of Security Science, Vasilije Vujičić and Božidar Vučurević, are participating in…