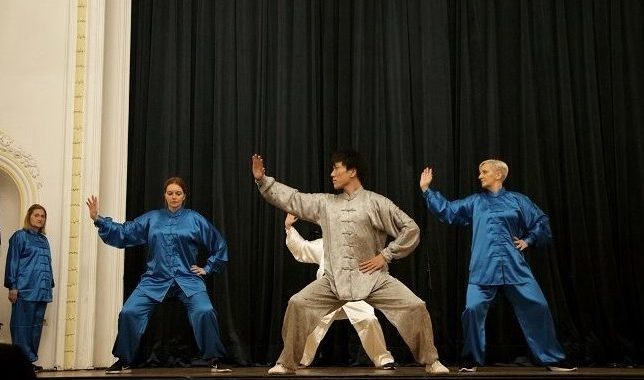 On 25 January 2020, the Chinese New Year was celebrated with performances in the Banski dvor Cultural Center given by the students of the Confucius Institute at the University of Banja Luka.

Rector of the University of Banja Luka Prof. Radoslav Gajanin, PhD, said that the Confucius Institute is the first in Europe for its activities, which is extraordinary given that it is also one of the youngest ones.

Rector Gajanin stressed that the Institute has had a lot of activities since its establishment, the study of Chinese language being of particular importance.
He also noted that this institute helps in bringing the culture, tradition and customs of the people of China and the Republic of Srpska closer.

,,This year we have ambitious plans, we have announced the opening of Confucious Classroom at Banja Luka Grammar School, and I believe that we will manage to start the study program of Chinese Studies at the Faculty of Philology, for which we have the support of the institutions, the Government, the relevant Ministry, and the President of the Republic of Srpska’’, Rector Gajanin said and emphasized that the Confucius Institute also marked two years of successful work this year.

Deputy Mayor of Banja Luka Srđan Amidzic said that for Banja Luka it is also important to mark two years since the founding of the Institute as well as the Chinese New Year, as it shows that it is a good host and has much to offer, but also that it can build friendships with significant economies and social communities, such as China.

Amidzic said that Banja Luka has recognized on time the fact that one fifth of the world’s population speaks Chinese, and that it will support the University’s efforts and give everyone the opportunity to cultivate their culture.

Chinese Language Professor at the Confucius Institute, University of Banja Luka, Gao Yang explained that the Chinese New Year is traditionally a time for families to be together, having the Chinese New Year’s Eve dinner, prepared by all family members together.

She added that doors and walls are customarily decorated with good wishes for the family and red envelopes with money in are given to children and grandchildren.

,,This will be a year of the Rat, which means that it will be successful and bring fortune, love and happiness’’, Gao Yang said.

Chinese New Year celebration, organized by the Confucius Institute at the University of Banja Luka and Banski dvor Cultural Center, was attended by Minister of Education and Culture of the Republic of Srpska Natalija Trivic, the vice rectors of the University, deans and professors at the University organizational units as well as other distinguished guests.

Scholarship – The Ministry of Scientific and Technological development, Higher Education and Information Society

On October 29, 2019, The Ministry of Scientific and Technological development, Higher Education and Information…

Recommendations for reducing the risk of corona virus infection